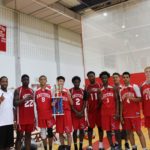 Assistant Coach: Spencer Boateng
The Minutemen Elite 17s had a lot of success in the 2018 Spring and Summer AAU seasons.
They participated in national tournaments including Elevate Hoops, Adidas Gauntlet, Basketbull Invitational, Rumble In The Bronx, and NERR Big Apple Classic.
They reached the semis in Elevate Hoops, Adidas Gauntlet Regional Qualifier, and the Adidas Gauntlet Gold/ Silver Classic finals which was an invitation only tournament.  They boasted a 10-3 record in the Gauntlet defeating teams that came from across the country, with several future, division 1 players on their roster. All three of these tournaments were in front of many Division 1 coaches and many from Division 2 and 3.
The Elite 17s squad made a strong statement in the prestigious Rumble In The Bronx tourney.
They finished up the season by doing well in the NERR Big Apple Classic and the Basketbull Invitational.
The Minutemen Elite 17s also participated in regional tournaments such as ZG Select, and Long Island Basketball tournament and were the champions in both tourneys.
Three of the Minutemen players on the 2018 Elite 17s roster have received Division 1 interests and scholarship offers.
Three of the players are currently playing basketball in college and the rest have interest from D2-D3 colleges.
2018 was a stellar year for the Minutemen program. We are looking to continue the success in 2019 and help place more student athletes in college.