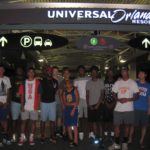 The team is coached by Stephen Marcellino, a collegiate coach with over 30 years of experience.
Steve is known for the development of student athletes at the High School and Collegiate level.
Hal Wissel of the Memphis Grizzlies, one of the best regarded shooting teachers in the nation
and internationally, gave a two day shooting clinic. Greg Butler, former NBA center and college
coach worked on post play. Mark Chasnov, a renowned physical trainer counseled the team on
physical development. Steve is also assisted by Felix Navarro and Norman Flynn.
The Minutemen are recognized for the academic and athletic development of their student
athletes in a structured team environment. The directors of the Minutemen, Joseph Pareres and
Stephen Marcellino were honored to recognize the many athletes on the high school roster who
qualified for this year’s Minutemen Academic Athlete Award.
The Minutemen Athletic Club is a not for profit athletic organization dedicated to developing the
student athlete both athletically and academically. The Minutemen have over 100 students
participating in their program which ranges from ages 10 through 18. For more information
about the Minutemen please feel free to visit the website: www.minutemenbb.com